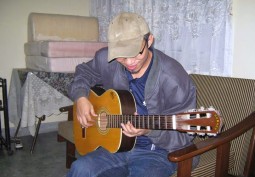 Ozym is a solo artist originally from Mizoram, one of the Northeastern states in India. Currently, he is living in New Delhi, the capital of India. He is a music teacher by profession, and is the owner of Mahanaim Music Learning Center. Apart from teaching, Ozym is a visionary and thoughtful songwriter. His uniqueness in writing, singing and playing styles made him recognized by people around the area where he lives. However, his ambitions never end up in just one place, he is the guy who dreams big and dare to act upon chasing his dreams regardless of hard struggle. He is the man who dare to share his philosophy to the world through music. He believes that faith is the key to everything but he believes in humanity. He is into various types of genre while his heart is more closer to Blues, Rock, contemporary and country music. Currently, he is working on his debut album likely to be released in the coming year. It will be a mixture genres. He was into music industry as a full timer since 2009, after surviving from depression being affected by the recession. There was a time that he had no more hope to move on in life. The dark side of the world ruled over his thoughts, and he found no more reasons to live. In a small room, in the middle of the night, he was battling with the dark power and trying to make an extreme decision. In the middle of decision making, he was picking up his guitar that lying at the corner of his small rented house and started to play. And, he supposed, that would be the last time he hears the sound of music in this world. Fortunately, however, beyond his expectations, he was so much comforted by those sounds that come from the guitar. Although he did not remember what exactly he was playing, but he clearly knew that there's something beyond the eyes could see, which has connection with another world through the sound of music. His thinking was gradually moved out from negativity to the brighter side as he continued to play till the morning dawn. Before sunrise he went up to the terrace and looked around. Trees are gently moving lopsided side by side by the rhythm of wind. There, he heard the morning songs of praise beautifully sang by the birds. He opened his mind wider and wider till it reach to the bottom of his heart. And looked up the sky, breezes gently whispered to his ears telling him that everything has a reason. Then, he found a brand new hope that very morning, and he realized, there are so many reasons to live. On that day, he wrote a very moving song 'REASON TO LIVE'. On the other day, as he chose to move on in life, he realized that music is his escapes from the power of darkness, then, he composed another song 'MUSIC SAVES MY LIFE' in blues style. His experiences and struggles in life made him write songs and composing music. Till date, he has composed more than 150 songs but none of them are release yet. Most of his compositions are about life, motivational, romance and the relationship he has with God. The most popular comments they give about his qualities are his kindness in heart, sincerity, loyalty and most of all, he treats everybody special who are around him. However, this is imperfect world, he is also human being! Currently, he is working on studio recording for his debut album. In his album, it will be a mixture of genre like Blues, Rock 'N' Roll, Contemporary etc. And, you will be able to find out 'who Ozym is' through the lyrics that he wrote by the inspiration of struggles in his life, romance relationship in his life etc. which, you can relate to your lives and experiences.