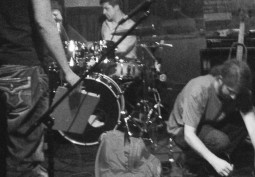 The Muckrakes hail from the Hampton Roads Virginia area and were formed in October 2008 to create original, roots inspired rock music. They released their first self-produced, self-titled 5-song EP in early 2009 which was hailed as, "a stomp strongly through weedy stagnant undergrowth with deftly articulated songs, lyrical stories wrought from heady memories, and true music-craft." In 2011 The Muckrakes released their first full-length CD entitled, "Grandiphonia". The band was nominated and won "Best Americana" band by Veer Magazine at the Tidewater Music Awards. In 2012, the band released a free digital album entitled, "The Muckrakes (LIVE)" that was recorded while touring North Carolina. In 2013, the band released its second full-length entitled "Pill Shaped Void". Pigeonholing South-East VA's The Muckrakes into any one genre is a difficult task because they meld so many vibrant instruments into a heady mash uniquely all their own. Their music can shift to sometimes quiet and reflective, sometimes foot stomping and rambunctious, sometimes pure and innocent, and sometimes dark and moody. . This is a alternative-indie-roots-rock band with bluegrass guts, folk sensibilities, sonic legs and a dash of the blues for good measure. Together, the group has found the right combination of sweet and sinister, of power and weakness, of new and old and is here to help make the celebration of life a little more rowdy.